A Look Back: New York’s Learning-by-Doing Response to a Pandemic 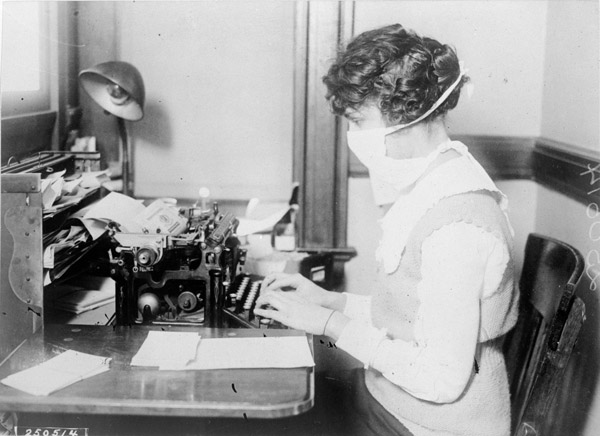 With thoughts of the latest pandemic on so many of our minds, it can be useful to look to history for context and reassurance as we try to understand our current predicament. Often, it is easy to become lost in a vague picture of the developing world as the sole bearer of afflictive disease. However, a look to the past will indicate that just a few generations ago, many, if not all, of the world’s most developed cities also faced massive disease outbreaks that challenged their best abilities to contain and manage viral threats. More broadly, it is important to recognize that public health remains a transformative, ongoing work in progress for cities everywhere and at all stages of their development.

As a leading cosmopolitan city, New York makes an especially notable example in its history of responding and adapting to global pandemics. Few cases are quite as relevant today as New York’s encounter with the Spanish Flu of 1918.

In the late 19th and early 20th century, women riding streetcars in New York City consciously avoided letting their hoop skirts and bustles touch the floor. The reason was that men riding these streetcars, many of them tobacco chewers, would often spit directly onto the floor. The mixed pools of phlegm and sputum that gathered there created a prime breeding ground for infectious diseases.

“Beware the careless spitter,” warned the Brooklyn Anti-Tuberculosis Committee. Aggressive campaigns like this aimed to control the spread of tuberculosis by encouraging sanitary awareness. Better public hygiene was enforced through community surveillance and mild fines, as volunteers and police officers reminded people to mind their manners. Medical devices including flasks and burnable paper cups were used to isolate infected expectorate, but proved incomplete as a public health measure.

Efforts such as tenement house reform laws mandating better ventilation, improved street-cleaning, and the distribution of sanitation pamphlets cleaned up New York’s streets. Most importantly, New York recognized the need to adapt its efforts to span the various language and cultural barriers within its diverse resident population, translating these pamphlets into Italian, German and Yiddish. Together, these sophisticated measures made New York City a remarkably cleaner place. All of this public health work resulted in greater preparedness for the 1918 flu.

When the flu arrived in 1918, New York’s already innovative sanitary-outbreak response system was escalated in the face of one of the worst-ever epidemics. Infecting an estimated 500 million around the world, and claiming the lives of up to 100 million people, the Spanish Flu, ravaged the young and middle-aged soldiers of World War One in much higher percentages than it did older or much younger people. To make matters worse, reporting on the flu was limited so as not to seem weak to war enemies.

People relied on aspirin, quinine, turpentine, salt water, topical rubs, inhaled substances for congestion and Bovril (a beef broth) for symptom management, as there were no diagnostic tests, vaccines, anti-viral or anti-bacterial medications, or ICU support like mechanical ventilators. New York City implemented staggered business hours which aimed to avoid rush-hour crowding, and also established over 150 emergency health centers. A partial quarantine ensured that supplies continued to flow to the European war effort. Massive campaigns were launched on the groundwork of Tuberculosis-era public health measures, reminding people to cover sneezing and coughing, reduce spitting, and to report infections. Infected-person isolation and quarantines reduced direct-contact communicability, and the targeted modification of human behavior, such as encouraging communication through case-reporting, helped slow the spread of the disease.

Sadly, 33,000 New Yorkers had passed away by the time the Spanish flu ended in 1919, leaving the city of 5.6 million shocked and uneasy about the future. However, the city recorded a 4.7% mortality rate, which, compared with 6.5% in Boston and 7.3% in Philadelphia, was surprisingly optimistic given the extremely grave circumstances. New York City’s experience is an example of how a combination of traditional and innovative approaches are ideal for addressing the moving targets that are public health outbreaks.

Today, with the improved availability of vaccines, medicines, and medical devices, cities are able to stockpile direct-care capacity. In conjunction with focused public health campaigns to modulate individual behavior, as well as other measures such as patient isolation, quarantines, and the encouragement of information sharing, a hopeful picture emerges. Just as one city benefited from its preparedness over a century ago, today we are better equipped than ever to stave off infectious outbreaks and respond to threats as they emerge. The next wave of improvement in public health practices – particularly emergency response efforts – is certain to hinge on how we leverage this preparedness on a global scale, standardizing the achievements of previous eras for the benefit of humanity worldwide.